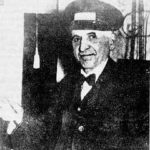 Even though the Social Security system was written into law in 1935, payroll taxes weren’t collected to pay for the system until 1937. Originally, you had the choice of taking a lump sum or monthly payout. In the first 3 years, everyone took the lump sum, with Ernest Ackerman being the first American to receive a lump sum payment in 1937. He received a total of 17 cents after paying only 5 cents into the program!

The first monthly check was issued to Ida May Fuller of Ludlow, VT. Fuller paid a total of $24.75 into the system throughout 3 years (1937, 1938, and 1939). The first monthly payment she received was for $22.54, and by her second check, she had already received more out of Social Security than she had paid into the system. Over her lifetime, she collected just under $23,000 in total Social Security benefits (after having only contributed $24.75) – a return of over 92,000%!

Changes in the Law

The Bipartisan Budget Act of 2015 is enacted.

Taxpayers can access their Social Security statements online by visiting.

The “Ticket to Work” program was officially launched in the first 13 States.

Welfare reform affects Social Security. Efforts are made to ease disabled workers into the workforce. 2000 SSA’s Internet service, SSA Online, reached the rank of #10 on the list of most frequently visited federal government web sites.

Because of a funding crisis, Social Security benefits are reduced. Benefits are taxed as income for the first time.

Automatic cost-of-living adjustments to Social Security are approved. Now COLAs are based on the rise and fall of consumer prices.

The Social Security program is expanded to cover the disabled children of workers.

The first cost-of-living adjustment (COLA) is made by Congress. Social Security payments are increased by 77 percent.

The Social Security program is expanded to include dependents and survivors of workers who retire, are disabled, or die prematurely.

The Social Security Act is passed by Congress and signed into law by President Roosevelt.